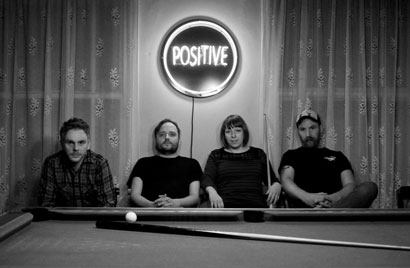 Nottingham quartet Grey Hairs formed in 2011 as an excuse to go the pub on a school night and played their first gig (Americans might know these as 'shows') in November that year. It was not bad.

The men and women of Grey Hairs have played in UK underground bands as diverse as Lords, Fists, Bus Stop Madonnas, The Cult Of Dom Keller, Kogumaza and probably hundreds more they, and you, have forgotten about.

You'd probably call them 'stalwarts' if it didn't sound like something your doctor would find in a prostate exam.

When asked what lead them to form Grey Hairs they will all give the same inspirational answer and that answer is "Geographical Proximity".

Being in a band in 2013 is the domain of the financially secure. You learn the art of touring in a Transit from the history books and you do it once or twice as a rite of passage before you get a proper job. Every week a new book or documentary comes out that redefines then-young-people's instinctive and impulsive actions as acts of clear, intelligent design and those once-young-now-old-people reunite to play their accidental masterpiece albums to crowds of actually-young-people as though they designed it that way.

You know what? Fuck that.

Grey Hairs are financially insecure and worried, staring middle age in the face and backing down, afraid. The future is confusing and upsetting. The young distress them and they deal with modern technology like a dog being shown a card trick. Are they angry? Yes they are. What are they going to do about it? The same as they've always done: form a band and tour in a Transit while no one takes any notice whatsoever. It's said it isn't stupid people who make mistakes, it is stupid people who repeat them again and again.

ACTIVE FROM 2011 TO PRESENT