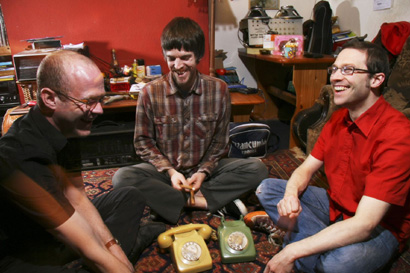 Bilge Pump have a disturbing ability to be better than any band they play with. Imagine a boiling-over bastard concoction of all the best bits of The Jesus Lizard, Led Zeppelin, The Fall, Blue Cheer, Funkadelic and King Crimson. A thick broth of art-punk fractured progressive noise, condensed into atonal pop songs free of power chords. Nitro-fuelled avant-jazz rhythms create enough structural form amongst the twisted guitar and off-the-cuff witticisms to provide an uncanny ability to incite dancing! It doesn't matter how wired or weird Bilge Pump get; behind the progressive noise there are clear, distinctive, memorable songs: a rare and winning combination!

Formed in Leeds during the murky depths of the mid 90s, it didn't take too long for the NME to churn out their now infamous declaration that Bilge Pump are " unlistenable guff"; so far, so good. It took them 7 years to produce their first album, 'Let Me Breathe', released by Gringo in 2002. It has taken another 5 years for their second album to arrive, but in that time they have probably played with, dismayed and blown away all your favourite bands (take your pick from Lightning Bolt, Erase Errata, Part Chimp, Trans Am, The Mars Volta, Hella, Foals, Get Hustle, Les Savy Fav, Enon). They will probably make you want to quit playing music, but you'll get over it. They may not have done an interview in a magazine for you to read. But they probably are the best thing you've ever heard, and if you haven't heard them, they probably are the best thing you've never heard, and if you've never heard them, you probably should, and here's your chance!

Here's a small sampler of their pedigree:
Various releases on Gringo, Troubleman Unlimited, Unlabel, Jonson Family, Obscene Baby Auction, Noisestar, Run of the Mill. They have been involved with bands such as Polaris, Red Monkey, Propulsion Family Picnic, HiM, Snail Racing, Mask, Diesel Versus Steam, Baby Harp Seal, Quack Quack, Enablers. They recorded several John Peel Sessions (in which Peel is chomping at the bit for more - only very rarely did I hear him quite so enthusiastic). Joe makes custom valve amps for the likes of The Fucking Champs. Brian Chippendale from Lightning Bolt admitted he's a one-trick-drum-pony compared to Bilge's Neil Turpin in a Pitchfork interview after they played together in 2006.

Brace yourselves, lock up the liquor cabinet, and throw logic out the window, because Bilge Pump is comin' atcha with a hardcore ear-assaulting noisy punk rock free-for-all. Indecipherable shouted vocals -- sort of like David Yow from The Jesus Lizard singing through a sweaty Army vest -- a rambling, almost free-jazz bass line, shrieking guitars, and racing apoplectic drums come together for... cacophony. Fierce! - Epitonic