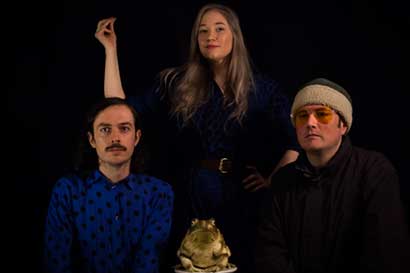 Glasgow trio Order of the Toad are making music which sounds quite unlike anything else around at the moment.

We'll be releasing their second album (Re-Order of the Toad) in 2020 as a co-release with Reckless Yes and to give you an idea of what to expect check out how Monorail Music described the band:

"Melodically, Order of the Toad have something of a medieval fixation, filtered through late 60s influences which end up sounding something like Jefferson Airplane - not least in vocalist Gemma "The Wharves" Fleet's powerful lung-force - mixed with British psyche heat.. think Kaleidoscope or even Syd Barrett drug-damaged whimsy. There's no other band doing this in the U.K. that we know of, a musically rich tapestry woven from strands outside current trends."

Order of the Toad