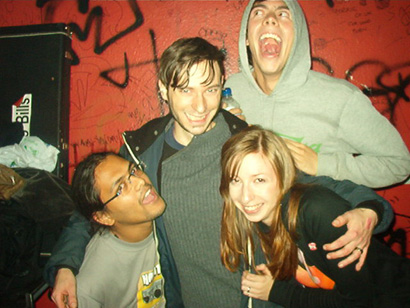 A Brief History of... Confusion, Madness and Eclecticism

During the reign of Queen Elizabeth the 2 nd, a band was formed, not just an ordinary band, a band of mixed origins, of Common wealth members, indigenous British, a band that will remain forgotten in the histories of rock and roll, a band so insignificant it hardly merits the effort of writing this here biography . A band that's main purpose was to arouse the fuckousity in all beings, via music, via the ear drums, via the brain.

Local folklore suggested the band formed in early 2000 AD, shortly after the infamous Y2K attacks from rouge computers that ravaged the lands of the Western Hemisphere. It has been proposed that the Designer Babies were formed after a plane transporting the highly unstable radioactive material Isotope K-69 accidentally dropped its cargo in the wake of the horrendous Y2K attacks. This has never been verified and the official documents relating to said aircraft is strictly confidential and in the hands of MI6.

The band evolved over a period of many years and included various band members. The originals...one Dusty Bible and one Rusty Sheriff. The pair met after walking past each other in Nottingham's market square, noticing that they both were producing blue sparks from their respective asses. Compelled by a sense of need and urgency they plodded unknown territories inspired by DJ Carhouse and MC Hellshit, the Boredoms, Melt Banana, Fantomas and Captain Beefheart, began writing songs and performing gigs. Unbeknown to the general public the Designer Babies were formed, genetically superior beings, enhanced to create music of outstanding quality and interest, began a short but intense journey.

It soon became apparent to the man on the street the Babies were no ordinary music group, and were approached by strange person after a gig at the Old Angel in Nottingham. Sir Kush D asked about singing for the Babies, after hearing him sing they were convinced of the quality and madness of the sounds produced from the Mauritian's throat that he was indeed a Designer Baby. More power was required to wake the slumbering public; the band decided and went in search for a drummer.

Sir Kush D, found and recruited Nick Ateen, a violent disturber of the peace and a race horse of a drummer, was quickly accepted into the illicit fold.

Here records are hazy at best. It is known that the Rusty Sheriff left the group to research the properties of Yeti droppings and his replacement is one Kate Amean, a Devonshire lass capable of unleashing sonic terror.

Confusion... it is well known that the Babies were practicing like mad, every opportunity possible. Working on the music and showmanship. It is around this time the Monstrous Fromage Excavator EP was recorded. Produced by the legendary Captain Lockjaw Daniels and recorded in the bottom of a sandstone cave under the Forest's grounds cemetery.

Things descended into madness shortly after the self release of this recording. After opening and thoroughly intimidating such notable acts as Oxbow, Melt banana and Deerhoof, with the recording and only Gringo release of the Baghdad Boogie 7" and the rare 3" CD Hot Baby Action. Tension ensued, the band wasn't as coherent and as solid a unit as it once was. During the brief period of what I wouldn't call success the Babies played various gigs around the country, as was known then as " England".

They soon lost their way and direction and due to interference from the Planet X52157 and stopped communicating effectively with each other. A 2 way split. Dusty Bible and Kate Amean, stuck together and remained the Designer Babies, Sir Kush D and Nick Ateen went to form ZuneZunegui.

Dusty and Kate hired Patch Cable, a drummer of extraordinary ability found under a Welsh Mountain and possibly descended from Merlin. The Babies with Patch now plodded on, more improvisation ensued, an intuitive music.

An attempt at recording an album for Gringo was made. Here records are lost... the great Lost Babies album "Blessed Obscurity" was never released as Patch disappeared off the face of the earth, his percussion power being irreplaceable the remaining members of Designer Babies went into hiding to regain some of their lost energy over the past years in awakening the conciseness of enlightenment. Failed and defeated Dusty Bible remained in hiding only to emerge occasionally to play the blues.

This is all that is known about the Designer Babies journey into the unknown territory of musical experimentation, fortunately for some, Gringo records holds a few remaining copies of the released recordings.

Give me a break half wit, you want a description so there it is, you think you could summarise this... band for lack of a better word

Fear for your lives the Babies are dead. DEAD I tells you!

Most likely you don't care... neither do I.

if you like Eric Clapton, don't listen (please die instead)

and if you like Radio one do yourself a favour and purchase a hand gun and visit your office that plays radio one and go on a killing spree... be sure to hand yourself in afterwards...