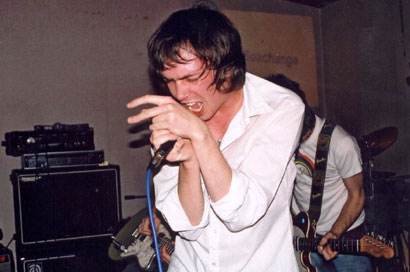 Nottingham , England - home to Seachange. A band that takes a sledgehammer to the preconceptions of alternative rock. They are band who rock like the Stooges jamming with the Valentines. They take the neo-psychedelia of the Spacemen 3 and the tautness of Joy Division to the outer limits. Yet they rein in the wild excesses to pack a mighty punch.

Seachange's raison d'etre is unaffected - get six of your mates together and form a band. Simple. Together they craft melodic, tightly-knit, guitar-driven songs. Songs that bear such unequivocal titles as "Superfuck" or the more abstract "A vs Co10". The songs grow of their own accord.

From there to nowhere. Seachange move in together. They share a house and practice in the basement. The house is haunted. They freak out and move out. A disused Victorian swimming pool becomes their next rehearsal space. The acoustics lend themselves to their taught rock and roll onslaught.

A wider audience awaits. Early demos find their way to Peel and Lamacq. They embrace the seachange and early exposure ensues. They play with kindred spirits And You Will Know Us By The Trail Of The Dead. A single comes out on Radiate Records and they tour with fellow miscreants Eighties Matchbox B-Line Disaster. They open for Idlewild and Interpol.

For Seachange 'punk rock' doesn't equate to hollow attitude and aped sounds. You want a community-led thrifty DIY spirit? Try the kids who organised a year long club night tagged 'Why Can't We Just All Get Along?'. It succeeded in uniting the vagabonds of Nottingham in ways not whispered of since that Robin Hood chap.