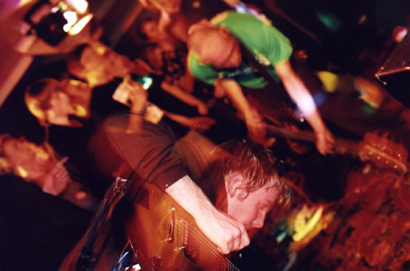 Wolves! (of Greece) played live for the first time on November 26 2000 as support to ... And You Will Know Us By The Trail Of Dead at the Boat Club in their native Nottingham, and release their first record, a single-sided 10" vinyl only release via Gringo Records in April. That much, at least, is beyond dispute.

The group members' backgrounds too, are reasonably well documented; one or more having previously been members of bands as diverse as Bob Tilton, Heresy, I am Spartacus, Reynolds, Schema and The X-Rays. It is with the expectations that some or all of these have created among sections of the audience for Wolves! that things start to become complicated.

Wolves! refuse to take themselves as seriously as some would like, yet take what they do very seriously indeed. They seek to subvert expectation. The noise they create may appear to be chaotic, but it is always, if not rigidly structured, then at least clearly defined. It may regularly be almost overpoweringly loud and abrasive, but it is never aggressive or confrontational. It may invoke unease, even tinnitus, but its aim is (with apologies for veering close to the pretentious, here) a kind of catharsis.

Although that isn't really the point. It just isn't that easy to say what is. Maybe it would be better to ask what the point of working in an office is. What the point of David Beckham is. High volume is often presented as an end in itself, when it's primary function is often simply to disguise an absence of substance, a veneer to protect the self righteous and the self important. With Wolves! (of Greece ) it masks a more subtle aesthetic. Expectation becomes self defeating. Those coming to the Wolves! expecting melody often leave believing they have found none; yet it is never far away - it's simply that it is never forced, never allowed to be the focal point, but is disguised by an equally deceptive semblance of chaos.

Structure remains fluid, yet absolute. Rather than adhere to some linear construct where B follows A in a pre-ordained manner, each member is allowed freedom to roam within parallel, individually defined boundaries, in a manner which, it could be argued, take the Wolves! closer to jazz than anything else, multiplying permutations.

This has always been central to the nature of the Wolves! (of Greece ), as has the relationship between the nature and the actual sound of what is created. So, rather than being an external process whereby the music is transmitted to an audience, the live mix (and the recorded sound) of the Wolves! is as integral a part as any other.

And if this all sounds like a deliberate attempt to find an alternative to the by now ritualised approach to writing and performing music, that's because it is, albeit in a far less coldly calculated, clearly delineated way than it might appear. But it isn't the only tired ritual being challenged by a Wolves! live performance, as the equally ritualistic relationship between performer and audience is another cosy situation being questioned. So, no perfunctory gaps - spaces where the audience is expected to applaud what they have just heard - are allowed; any silences being random consequences of circumstance, of breakdown or necessary reconstruction, to be filled - somehow - and not allowed to linger.

In fact, if there is one central ethos to which the Wolves! always strive to fulfil, it is not to allow anything to linger. So, songs (and, yes, they are songs) flash by in an instant or two, never labouring a point, and they have never yet played a live set that has lasted as long as 20 minutes. But they might tomorrow.

Because, if there is a central contradiction in what Wolves! (of Greece) are all about, it is that they risk becoming predictably unpredictable; that their attempts to radicalise will stagnate into just another collection of cliches and formulae - so all of this might already be untrue. But so far, they have succeeded in avoiding stagnation, and, having played with (and been championed by many of) the likes of Melt Banana, Part Chimp, Enon, Fugazi, Lightning Bolt, Oneida, Tristeza, And You Will Know Us By The Trail of Dead & 90 Day Men, they have managed simultaneously to astonish, confuse, disgust and reduce audience members to tears whenever and wherever they've played.

And, with a performance broadcast by R1 during 2002's One Live In Nottingham, made John Peel's teeth hurt.

Never having been the most prolific of performers in the past (something which can reasonably attributed to a combination of a necessity to hold down day jobs and various members' ongoing involvement in other musical projects including Great Bear, Lords, Last of the Real Hardmen and Savoy Grand), the release of the 10" is accompanied by an atypical burst of Wolves! activity.